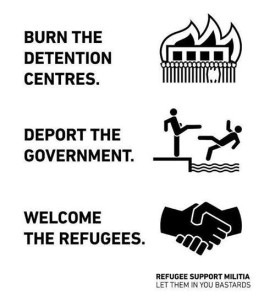 Anti-deportation Anarchist Group Utrecht The AAGU strives for a society in which all political and economic power from above is replaced by a structure of free cooperation. In these partnerships the political and economic life is organized collectively and decisions are taken only by working together. This free society can only exist when freedom is universal: someone can only be truly free when other people are free also. The quest for freedom therefore automatically means a struggle against state and capital worldwide.

The modern nation-state exists by virtue of the idea that people can be divided into various “nationalities”. The more the nation state will be placed under pressure by globalization, the more will be held on to the story of our supposed national identity, largely a nineteenth century invention. Meanwhile, economic globalization is still encouraged because Western wealth and achievements can only exist thanks to economic oppression of people elsewhere in the world. That is why we start the struggle against state repression by fighting nationalism, which is only possible if anti-nationalism is accompanied by a commitment to global economic equality.

The anarchism of the AAGU is given concrete form in action against the detention and exclusion of the victims of modern nationalism, the prisoners of Fort Nederland. The nation state excludes the people who do not have access to the achievements of those that do have a Dutch passport. These people are allowed to participate only in extremely precarious conditions in the economic and social life, as so-called “illegals”. A large part of Western capitalism runs on the illegal economy. The illegalized ‘precariat’ stands completely outside of what is called the rule of law, and illegal workers can be arrested anytime and be imprisoned for an indefinite time.

The so-called ‘justice’ does not protect people who don’t have the documents required by the state in any way. This justice is only the justice of the state and therefore of the economic and political elite. The AAGU doesn’t want to particiate in this so-called democratic “justice system”. This kind of justice is merely the velvet glove of the devastating armored fist of Western capitalism. What is called ‘justice’ and ‘democracy’ in the Netherlands in reality is the injustice and dictatorship of the property-owning and ruling class. This injustice can not be demonstrated any better than by exposing the overall lack of rights of people who are banned from public life, such as those labelled as ‘illegal’.

The AAGU is trying to achieve its goals through non-violent direct action. It aims at the machine that serves the detention of undocumented migrants. The AAGU considers the prisons where these people are locked as a means to maintain a criminal regime of exclusion and exploitation. Anyone with any sense of justice would not have to wait until these dungeons of the state are broken down to their final stones. Violence against persons is thereby excluded, because in our opinion only the use of non-violent means can be in accordance with the objective of achieving a free society.

Anarchism is based on self-organization and grassroots democracy. Self-organization is virtually impossible for detainees in refugee-detention. However, everybody is more or less a victim of every day state terror. That terror is becoming more apparent now that even civil liberties are sacrificed in favor of the supposed security that the state apparatus would offer us. The fight against refugee-prisons will therefore be conducted in solidarity with everyone who suffers from state repression, which is made legit by national thought.

The AAGU tries to apply its basic democratic principles within their own group. The group consists of a free collection of anti-authoritarian, radical, enthusiastic, active people. Obviously AAGU receives no money from the government, only occasionally by private (action) funds.

There is no president and decisions are taken only by consensus. The AAGU is affiliated with the Vrije Bond.

The Anti-deportation Anarchist Group Utrecht (AAGU) thinks undocumented migrants should not be detained. Refugees and migrants don’t flee voluntary. They’ve fled their country because of war, famine or lack of freedom. It is extremely ironic that people who managed to flee to build a better, freer life end up in prison. We believe that everyone has the right to freedom of movement and residence in the country where they want to live. We welcome open borders and a united world where there’s enough for everyone. It is often forgotten or deliberately not said that western countries also cause migration by the unequal distribution of wealth in favor of the West. Therefore it is not surprising that people flee to countries where they have relatively more freedom and better opportunities to exist. To deny people these possibilities testifies to
selfishness and greed.

Recently AAGU works together often with Stop The War On Migrants.

Stop The War On Migrants